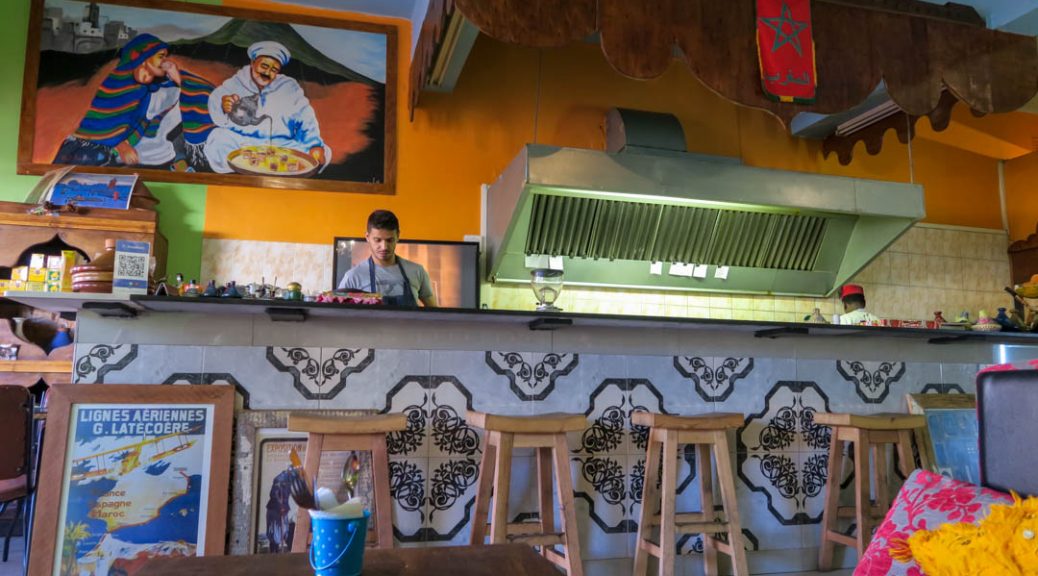 As mentioned in our review of Syriana, we are always on the look out for foreign restaurants and Moroccan cuisine has been at the top of the list. So you can imagine our excitement at finding a Moroccan restaurant while we were down in Cape Town.

Andalousse is located on Victoria Street in Woodstock. Finding the restaurant was a bit tough as there was no sign outside. It is right opposite the Woodstock Police Station and next to the Post Office.  Finding parking might depend on time of day and whether you’re visiting on the weekend or during the week.

We braved the gale force winds and got into Andalousse to find a quaint restaurant, decorated in Moroccan furniture and artwork playing Moroccan music and calmness that juxtaposed the madness outside.

There were no waiters, rather 2 gentlemen who played both hosts and waiters. They had a lot of energy and managed the restaurant well. The restaurant is not very big so call ahead and make a reservation.

We ordered Moroccan mint tea to start off the evening while we waited for our dinner guests. It was accompanied by really fresh and tasty date biscuits.

We wanted to taste as much as we could so for starters we went with the Harira Soup. Since there were 4 of us we ordered 2 full portions to share. The soup was accompanied with a cheese stuffed bread. Both the soup and the bread were delicious!

We were not very familiar with Moroccan food but we always wanted to try a tagine and looking at the menu, the Couscous looked great too. We decided to get two dishes to share. The host suggested the lamb Couscous (called ‘Couscous Bidaoui’) and a chicken tagine (called ‘Djaj bi Zitoon’) and we agreed.

The couscous was lovely. The lamb was really soft and melted in the mouth and the vegetables added extra flavour to the dish. The chicken tagine was served with a Moroccan Naan. It had a lemony flavour and tickled our taste buds. Although a little different to the tastes we are used to we really enjoyed it. Even more so when we had the left overs the next day!

We ended the evening with black coffee that was a blend of Ethiopian and Tanzanian beans and although the host said that I wouldn’t sleep after having that coffee, that night I slept like a baby!

Overall we had a fun evening enjoying authentic Moroccan cuisine and a chilled atmosphere. The hosts were really friendly and very happy when they saw me pick the last pieces of meat of the lamb shank! A highly recommend this food destination in Cape Town.

Find them on Google Maps – If you scroll through the pics here you you will see some pictures of the menu.

All reviews are our own experience of the establishment. We are not in anyway influenced by any third party in what we have written above.