The fairly new tar road that we were driving on came to an end at the Abbasi Mosque in the village of Derawar. We were greeted by beautiful white minarets and domes invoking memories of the Badshahi Mosque in Lahore. A man walked out of the mosque courtyard and Farhaan went to greet him. He asked the man about the graves of the Sahaba that we heard were in this area. He told us to follow the same road towards the exit of the town and we will see water tanks. There we would see the mazaar of the companions of Prophet Mohammed (Peace and blessings be upon him).

Sukkur was the last town of the Sindh province of Pakistan that we were staying in. Next was Punjab. Everyone that heard about our travels up North had told us “Drive though Sindh in one day and get to Punjab”. The lack of speed in our car coupled with our enviable ability of getting delayed when leaving in the mornings meant that this would be impossible. We ended up spending three nights in Sindh stopping to see Kot Diji Fort and Mohenjo-daro. We also got the opportunity to cross the Indus river a couple of times.

While at the guest house in Sukkur we started researching points of interest near the next big city of Bahawalpur. We came across Derawar Fort which was some 170 kms before Bahawalpur about 70 kms off the main highway. We thought of leaving Sukkur and spending the night somewhere immediately after entering Punjab so that we could visit Derawar Fort on our way to Bahawalpur. After speaking to Farhaans uncle we booked a guest house in Sadiqabad.

The drive from Sukkur to Sadiqabad was a mere 170 kms and we planned to be there at around 3pm so that we could get some time to write a blog post. And 3 pm it was, when we entered the town of Sadiqabad and reached the point on Google maps marked with the golden star that tells you that you saved this location.

Nothing. Just a few old structures and empty pieces of land. We drove around a little in the streets off the main road but only saw more empty plots and private houses. Attempts to call Jovago and the guest house were met with a very calm lady on the other side of the line telling us that the number was not available. We asked a few men sitting in front of a newly built building and they said they do not know of any guest house and gave us directions to another hotel and offered us tea and food which we kindly declined.

Just a side note here, where ever we stopped to ask for directions or chatted to people at a filling station and they heard that we were travellers they would offer us a cup of tea, cold drink or food. Such is the hospitality of the people of Pakistan.

We then went to a shop further down the road to buy airtime for our phone. The man there informed Farhaan that the said Guest House had closed down and directed us to a new “very good” hotel. We decided to check it out and after a wrong turn ended up driving next to a very smelly canal. As we took the U-turn to track back a maroon Suzuki Jimny overtook us on this single lane road with richsaws and taxi’s coming from the opposite direction. A few meters later the said 4×4 suddenly took a sharp turn blocked the road ahead of us and came to a halt. Out came a man with an official rush in his walk to Farhaans window, introduced himself as an intelligence officer, announced that the rest of the team is on their way and asked to see the car papers. By his nervous nature, we knew he was bluffing about the team.

Now, over the 15 countries that we have travelled we’ve been stopped numerous times by all kinds of scary and official looking blokes and we are kind of used to this. So Farhaan casually asked to see his ID and after perusing it showed him the papers. He made a phone call to someone and then told us that it would be best that we leave Sadiqabad and travel to the next town Rahimyar Khan, which we did.

The next day we left for the city of Bahawalpur but with the firm intention of going to Derawar Fort along the way. We only took the turn off for Derawar around 3pm. We couldnt find it on our GPS so decided to use google maps which, for Pakistan, does not give you voice navigation but will provide the route. This meant that we had to watch our position on the map and take the correct turnoffs.

The plan didn’t work out very well when the very first turn was closed off. We looked at the map and found another route to the correct road. As we travelled further the vast green fields, the mustard plantations and desert sand that appeared in between them totally distracted us and very quickly we forgot about the map we were supposed to be keeping an eye on.

“Are we on the right road?” Farhaan asked waking up from the dreamy drive that we were enjoying so much. “Oh no”, said Khairunnisa, “we left our turn behind”. So we took a U-turn and drove back through the little village lined with fruit stalls, meat shops, samoosa and pakora (chilli bites) stalls and many more. We were quite hungry so Farhaan pulled up at the samoosa and pakora stall bought some snacks and confirmed directions to the fort.

A couple of wrong turns later, feeling satiated with the very tasty snacks, we were on the straight, fairly recently tarred road to Derawar. The road again was lined with bright yellow mustard plantations on one side and green meadows on the other. These would abruptly give way to desert sand with shurbbery and small dunes and that would suddenly turn back into alternating green and yellow fields.

The road took two bends and we saw a big sign across the road announcing our arrival at the Derawar Fort. We continued to drive and the road wound through a sparsely populated village with neat mud houses and a few grocery shops. The road ended at a spectacular but not huge white mosque reminiscent of Mughal style architecture with a courtyard that has 3 entrance doors. This mosque, also called Derawar Mosque is apparently built as a replica of the Moti Mosque in Delhi, India. The main entrance faces a body of water that according to some, was once a large river whose banks use to be quite close to this entrance. It enters into the courtyard of the Abbasi Mosque with the white domes and minarets greeting the visitor. The sign that welcomes visitors at the only road entering the village. Walkway to the masjid 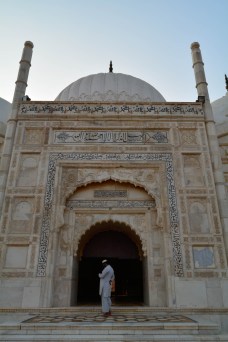 A window in at the mehrab provides a view of the Fort.

The main entrance door exits out to a lake that used to have a lot more water in the old days.

This the entrance structure of the Abbasi Mosque From the main entrance the while domes of the mosque greet the visitor. From here we drove our car a very short distance through a large entrance gate and along a narrow path that led us to the Derawar Fort. The fort stood in front of us in its former glory but showing definite signs of ageing. Many of its forty bastions towered over as we stopped our car and took in this magnificent sight. There were parts where bricks had fallen off and the entrance gate was closed. We later learned that visiting inside is not allowed as the building is vulnerable to the elements given its age and lack of restoration efforts.

We now feel honoured and sad to have visited the endangered site that stands like a shining jewel in the Cholistan desert. If attention is not given to the restoration of the Derawar fort, future generations will not get to experience this piece of historical architecture.

A few photographs later, we went in search of the Sahabah that we had confirmed lay near by. We drove through a small patch of desert sand back on to the only tar road of Derawar and after a couple of minutes saw a white structure with green flags denoting the resting place of those close to God. We turned of the tar again and drove a few meters to towards the Mausoleum.

As we walked through the graves outside and came closer to the white building we were stopped dead in our tracks by the most beautiful sweet fragrance in the air. We stood there for a few moments just taking in this scent and then went inside. We spent a few minutes in silence and offered our supplications for the Sahabah that lay there and left feeling blessed and happy to have stood in their company.

The sun was starting to set as we made our way to Bahawalpur city but that did not deter us from stopping to take some photos of the mustard fields and the beautiful sunset.